TO SIR WITH LOVE

THE FALL OF THE HOUSE OF USHER

THEATRE AMONGST THE TREES SUMMER PROJECT

This section presents all the latest news about us and our projects. 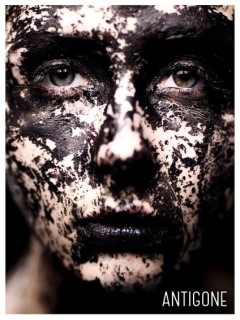 A state ravaged by war is reborn under the tyrannical rule of King Creon.  Demonstrating his power over the citizens of Thebes, Creon declares that two warrior brothers are divided in death; one an honoured hero and the other a traitor to be left unburied and unsanctified for carrion birds to devour.  Defying the King's edict, Antigone buries her brother's body; challenging the social and political hierarchy with tragic consequences for all.

In a contemporary staging of this Ancient Greek play, Antigone explores the question of state control versus individual will and the power of love over law in a dramatic story that still resonates today.
"clevery designed and well directed...vivid production." The Public Review
"Trudy A Bell - you never disappoint...[the cast] goes the extra mile with you in the director's chair." Mudbeast76

To see photographs from the production by photographer Graeme Braidwood, CLICK HERE.

ALIAS THEATRE'S ARTISTIC DIRECTOR, TRUDY A BELL, RETURNED TO THE UNIVERSITY OF NORTHAMPTON TO WORK WITH EMERGING ACTORS ON THIS EXCITING NEW PRODUCTION OF SHAKESPEARE'S TRAGEDY MACBETH.

"This is how Shakespeare should be: alive, exciting and innovative. I loved it!" Mudbeast76

TRUDY WILL ALSO BE WORKING ON THE SHAKESPEARE SCHOOLS FESTIVAL, DIRECTING PRIMARY AGED STUDENTS IN A LOCAL SCHOOL IN THEIR NOVEMBER PRODUCTION OF MACBETH.

Featured Creative Project
Here are details of one of our most successful summer arts projects. Call us on 07802 410493 to find out more about it and discuss what we can offer you in similar projects.

THEATRE AMONGST THE TREES

Theatre Amongst The Trees was a summer arts project aimed at boys and girls in School Years 2-8 and previous members of Alias Theatre.  It was a 5-day project that explored how art, poetry, stories, theatre, music and dance could be created using natural materials and settings within the local woods.  It was open to anyone who was interested in using the outside world to explore different art forms - this was not a project just for performers, it was for everyone who wanted to have fun and use their imaginations!

The project took place at Alameda Middle School in Ampthill, Bedfordshire and the woods surrounding the school.  Most of the activities were outside in the woods where participants gained inspiration from the natural environment.

Everyone had an amazing week going on sensory forest walks, writing poems, creating art pieces, making masks and costumes, and performing The Legend of the Wooden Shoes in the woods.  This was truly a fantastic project where everyone grew in confidence, made new friends and smiled their way through the week!

If you took part in the project or attended the performance, we would love to get some feedback on your experience. Use the contact form or email us directly at info@aliastheatre.com

If you would like to see photographs from the

Theatre Amongst the Trees Project 2012,